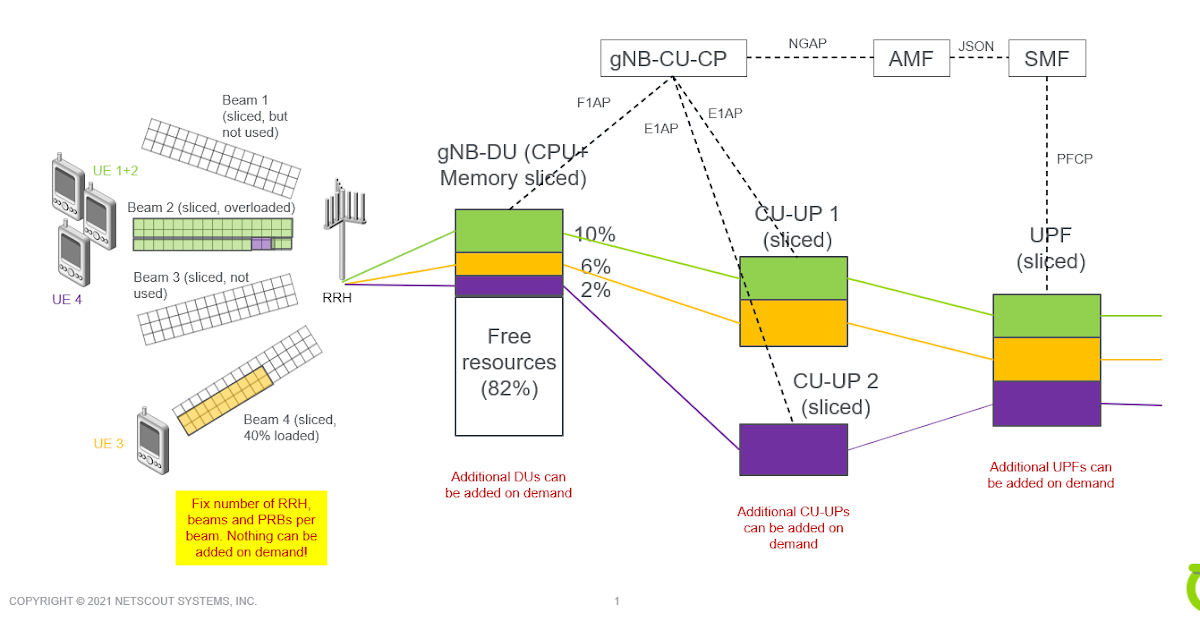 I have been asked to explain in a nutshell how network slicing works in NG RAN. The most important facts you will find in the infographic below.

A network slice is virtual part of a network that offers full end-to-end connectivity for particular services and – optionally – for tenants. A tenant is a 3rd-party company that rents a virtual part of a public mobile operator’s network. This allows the tenant to run its own private nation-wide mobile network without owning any hardware.

The network slicing is enabled by virtualization and all network functions can be divided into different slices as well. Thus, you can find in the figure the User Plane Function (UPF), gNB Central Unit for User Plane (gNB-CU UP) and gNB Distributed Unit (gNB-DU) all sliced.

It is also possible that a network function is dedicated for a particular network slice as in case of (gNB-) CU UP 2.

In general – and this is the benefit of the cloudification – the NG RAN is a highly dynamic environment in which additional NW functions can be added (and later released) whenever this is necessary. Mostly this will be triggered by the load on CPU and memory resources. Here comes the automation into the games that deals in large parts with load balancing. Ideally automation enables a zero-touch network management.

However, the most precious of all RAN resources, the radio resources, cannot be administrated so flexibly and easily. Indeed, there are several automation instances that deal with radio resource management. Open RAN Alliance has defined the RAN Intelligent Controller (RIC) that is split into the Near-Realtime-RIC (RT RIC) that shall operate with a latency between 10 and 500 ms while the Non-Realtime RIC (NRT RIC) deals with non-time critical task, e.g. typical SON functions like Automatic Neighbor Reporting (ANR).

While the RIC can deal with a lot of problems there is one thing it cannot do: adding physical layer radio resources on demand. The physical resources are limited by the number of remote radio heads/antennas and as long as we have only static beamforming the physical resources covering a geographical sector are also limited by hardware and their distribution must be carefully planned. Thus, I think it is fair to say that the RIC (or a similar proprietary automation function) has to deal with the most complex situations in the RAN.

Radio resources can also be sliced in different ways. My figure illustrates a kind of slicing on the physical layer where different physical resource blocks (PRB) are allocated to different network slices.

However, this is not the only way how the resources of a cell or a beam can be sliced. Beside a split of PRBs it is also possible to slice on the MAC layer where logical channels (slice-specific radio bearers) are mapped onto transport channels or on PDPC layer as it was described and demonstrated by the 5G NORMA project (Chapter 2.1, page 17 ff.).

What in the end will be implemented by the RAN equipment manufacturers is a question I that cannot answer today.