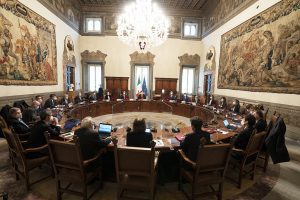 When Italian Prime Minister Mario Draghi held the first meeting of his new Council of Ministers there was a very familiar name on the list of attendees.

Vittorio Colao is serving as the Technological Innovation and Digital Transition Minister in the Draghi government. He is one of nine ministers without portfolio and one of 23 in total.

The ministry’s remit, in its own words, is to encourage the spread of simple, inclusive and efficient digital services. Colao has some experience in that area.

To state the obvious, Colao served as chief executive of Vodafone Group for 10 years until he stepped down in 2018, passing the baton to the current holder of the post, Nick Read. He did not share any future plans at the time; it’s fair to say we all presumed he intended to semi-retire, despite being only in his late 50s.

Vodafone dominates Colao’s career history. He joined Omnitel Pronto Italia, now Vodafone Italy, in 1996 after a decade at McKinsey & Company. A couple of years later he became the Italian unit’s chief executive and later Vodafone’s CEO for Southern Europe, Middle East and Africa. In 2004 Colao jumped ship to become chief executive of publishing giant RCS MediaGroup, but two years later he was back, taking on the roles of deputy CEO and Europe CEO, before stepping into Arun Sarin’s shoes as Group CEO in mid-2008.

He is currently on the board at Verizon and General Atlantic.

Far from retiring though, Colao has been heading up an Italian government task force geared towards aiding the country’s recovery from the Covid-19 pandemic since last April. He was appointed to the role by former Prime Minister Matteo Renzi, a sign of the importance of digital technology as Italy and indeed countries the world over grapple with the impact of the pandemic.

Colao’s inclusion in Draghi’s Council of Ministers will doubtless bring more of the same: a concerted effort to use technology to rebuild an economy battered by Covid-19.

Covid-19 aside, it’s an interesting time to take on a digital tech role in the Italian government. The state’s single network plan for ultrafast broadband is making progress, albeit slow, while incumbent operator TIM and Open Fiber – both of which are soon to form part of that single operator – are pushing on with fibre network rollouts and state projects to take high-speed connectivity to hard-to-reach areas are underway.

The new Draghi government will have just as much focus on extending the reach of technology to as many Italians as possible as that of his predecessor.

Speaking of whom, Renzi formally handed over power to Draghi at the usual swearing-in ceremony in Rome on Saturday. Draghi, the man credited with saving the Euro during his tenure as President of the European Central Bank just under a decade ago, faces an enormous challenge in managing Italy’s Covid-19 recovery. On the technology side, he has an experienced assistant in Vittorio Colao.