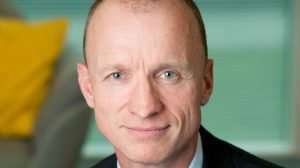 Olaf Swantee will join Vodafone as a non-executive director this summer, provided his nomination gets the go-ahead from shareholders at the telco’s July AGM.

In many ways, it’s hardly news. A seasoned telecoms professional joining a telecoms group’s board is a fairly common occurrence. But Swantee’s move to Vodafone has understandably captured headlines because, despite having an extensive career history in the industry, he is still best known for his stint as chief executive at EE, an arch-rival of Vodafone in the UK. That, and the fact that it was a slow news day when the announcement was made.

“He brings a wealth of communications expertise, has a strong track record of value creation and has presided over a number of Europe’s leading telecoms businesses,” said Vodafone chairman Jean-Francois van Boxmeer.

Swantee took the helm at EE in 2011, having previously held various senior positions at Orange and tech firms Hewlett-Packard, Compaq Computer and Digital Equipment; he left EE in early 2016, when it was acquired by BT. Almost immediately he took up their reins at Switzerland’s Sunrise, but left that job at the start of 2020, (possibly coincidentally) shortly after its failed acquisition of UPC.

In addition, he has significant board level experience in telecoms and adjacent industries. He is currently serving on Telia Company’s board, but has disclosed that he will not stand for re-election once his term ends.

“He is also passionate about technology and its potential to change society for the better,” van Boxmeer added. “I look forward to Olaf’s contribution to our Board and him playing a significant role in the next stage of Vodafone’s strategic development.”

While Swantee’s move to Vodafone may not exactly be newsworthy, it is good news for Vodafone. The new director has plenty to offer.

Shareholders should be happy to vote him in later this year. Telecoms is not (much) like football; having played a starring role at one top-flight operator does not mean you are tainted in the eyes of the fans stockholders at another.

Vi Mobile App Adds Support for Up to 25 Profiles, Vi Movies & TV Gets More Live Channels: Report
5G Phones May Interfere With Aircraft Altitude Instruments, French Regulator Says
Facebook is a private company… it can do what it wants!
Satellite networks and a new kind of communications industry
Netflix Can Now Automatically Download Movies and TV Shows for You