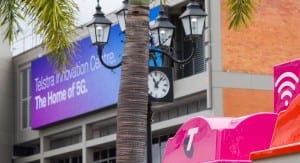 Telstra is taking back control of its network of retail outlets, many of which are currently operated under licence by third parties.

The Australian incumbent said the move, which will affect a couple of hundred stores, is driven by its need to keep pace with the growing digital economy and to give it more flexibility in dealing with customers. Ultimately, it seems, Telstra is after a more consistent customer experience and that means it wants to be more hands-on in its stores and to have its name above the door.

“As more customers interact with businesses online resulting in changes to the broader retail industry, we think now is the right time to bring back full ownership to further develop a consistent and integrated customer experience across our online channels and store network,” said Telstra’s Group Executive for Consumer and Small Business Michael Ackland, in a statement that accompanied the telco’s half-yearly results announcement.

At present Telstra has 67 stores that it owns and operates; 166 Telstra branded stores that are run by independent licensees; and 104 operated by retail specialist Vita Group. The telco said it will start talks with Vita Group immediately, while negotiations with independent licensees about the transition to Telstra ownership will begun shortly, with the process expected to take 12-18 months. Telstra said it will offer new roles to current store staff “in the majority of cases.”

Telstra did not specifically state whether it will retain the current full extent of its retail footprint though.

“Telstra expects to maintain a large retail presence across Australia while also expanding the availability to purchase and access services via its digital channels,” it said. Read into that what you will.

“We know that in many regional and rural towns, the local Telstra store is a valued part of the community providing support to a range of businesses and residents,” Ackland said.

The Covid-19 pandemic was also a factor in Telstra’s decision.

“At the height of the Covid-19 pandemic we were able to redeploy frontline staff from Telstra-owned stores to assist customers through our digital channels or via the phone,” Ackland said. “It’s this flexibility in how we serve our customers that we’ll be able to unlock with more retail branded stores under Telstra ownership.”

Covid also had an impact on Telstra’s first half numbers.

The operator posted a 10.4% decline in turnover to just over A$12 billion, while underlying EBITDA declined by 14.2% to A$3.3 billion. The earnings decline was caused mainly by headwinds related to NBN, which impacted the number to the tune of A$370 million, and a A$170 million impact from Covid, it said.

“After a decade of disruption following the creation of the NBN, and with its rollout now declared complete, we can clearly see the path to underlying growth ahead of us,” Telstra chief executive Andrew Penn said.

Telstra aims to reach underlying EBITDA of A$7.5 billion-A$8.5 billion by financial year 2023, he said.

In the meantime, Telstra revised down its revenue guidance for the current year by A$1.2 billion at the midpoint of its range, and said it’s underlying EBITDA guidance for the full year includes a A$700 million hit from NBN and Covid impact of A$400 million.