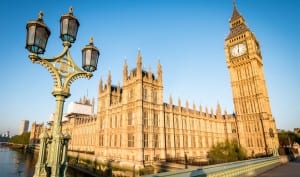 Fresh from its stunning insights into the broadband market, UK Parliament has decided it’s time to fix the mobile sector.

It was less than a month ago that the UK Public Accounts Committee dropped the bombshell that we might not cover the entire country in fibre by 2025 after all. Lesser legislative bodies would have rested on their laurels after such a Herculean effort, but not our lot.

So today the House of Commons Science and Technology Committee published a report titled ‘5G market diversification and wider lessons for critical and emerging technologies’. Its principal finding is that, having kicked Chinese telecoms vendors out of the UK, we’re only really left with Ericsson and Nokia, and situation is far from ideal.

“A lack of strategic foresight in 5G has seen the UK become dependent on only two vendors for a crucial technology,” revealed Greg Clark MP, Chair of the Science and Technology Committee. “We must learn from this experience to avoid making our economy and security vulnerable from a lack of acceptable alternatives in emerging technologies. AI and quantum technologies are just two examples of fields of development which can greatly advance the prospects for our economy and society, but can pose potential threats.

“While the Committee welcomes the Government’s 5G diversification strategy, it has come too late and contains little by way of detail. The Government needs to take an activist approach to encouraging research and development, and must now co-operate internationally to build common regulatory approaches with like-minded nations.

“As technologies develop at an ever faster rate, more time must not be lost. In a White Paper, the Government must urgently lay out a strategy for the most important technologies of the future to avoid repeating the supplier squeeze we have ended up with in 5G.”

Not enough strategy documents, that’s where we’re going wrong. Once we’ve done one it’s then just a matter of waving the magic wand and creating some more vendors. It’s so simple, you have to wonder why we didn’t do it sooner. You can read the whole 58-page report here, but if you can’t be bothered here are some selected highlights from the conclusions and recommendations.

The Committee sensibly recommends removing the stipulation that new vendors should be able to support all legacy technologies, something that is certainly a hinderance to Samsung. “It should consider options for addressing the barrier of operators’ preference for vendors to offer older generation technologies with their 5G equipment, such as incentivising or mandating standalone 5G deployments and/or the use of protocols such as the Open X2 interface,” it said.

“However, it must continually ensure that support for these efforts is consistent not only with increasing vendor diversity but also with improving the overall security of the UK’s telecommunications networks. Further, the Government must not assume that open standards and interoperability will inevitably be adopted nor that they will have the desired effect, and should pursue a range of measures designed to support market diversification and increase security.”

Talk about hedging your bets. Those recommendations essentially say the government should try to pick a winner, but not too hard as it might not work. This paragraph seems to encapsulate how the Committee thinks that delegate balancing act should manifest itself.

“The Government should align its strategy for diversifying the 5G vendor market with its support for rolling out 5G network coverage. Wherever the Government provides funds for expanding 5G coverage, it should look for opportunities to simultaneously support vendor diversification, for example by requiring the use of open standards.”

So, ultimately, the recommendation seems to be that the way the government can achieve the desired strategic aims is by dangling the carrot of public money in front of UK operators (what a shock), but making it conditional on them spending it in the approved way. Sensible operators will presumably either reject the money if the conditions are too onerous or, more likely, grab the cash and then game the system.

There are various other bits of wishful thinking around international cooperation and a broader strategy around ‘critical technologies’ which are worthy enough but very vague and open ended. It’s hard to see this report as much more than a list of strategic nice-to-haves coupled with a statement of regret that we don’t already have them. Perhaps the current state of lockdown has served to reinforce the delusion that the state can succeed where markets have failed but, as ever, if it really wants to help then maybe just get out of the way more.