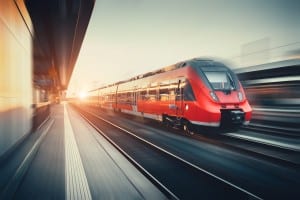 The Japanese operator said it had achieved a stable 5G connection, including handover between base stations and the transmission of high-definition video, on a train moving at, wait for it, 360 km per hour.

For those of us more familiar with being stuck between stations for what feels like hours at a time due to the wrong sort of leaves on the line, that’s impressive. And the fact that the 5G worked as well is also pretty cool.

DoCoMo carried out the trial in the October to December period last year in conjunction with the East Japan Railway Company (JR East), using the firm’s ALFA-X1 Shinkansen test train. It had 100 MHz of bandwidth in the 4.85 GHz band at its disposal.

“The trials confirmed that it will be possible to ensure stable mobile communication environments on high-speed trains for the delivery of high-value mobile services,” DoCoMo said, in a statement.

“Stable” is the key word here. While the train was travelling faster than a speeding…well, you know, the speed of the 5G connection was arguably less important than the fact that the connection was maintained. “Highly stable communication at 100 Mbps or higher was achieved over a distance of approximately 5 km, confirming the possibility of practical, reliable communication,” the telco said.

That said, the 5G speed itself was not to be sneezed at: DoCoMo said it achieved maximum data rates north of 500 Mbps in the downlink and 100 Mbps uplink.

The trial used two base stations within 1 km-1.5 km of the railway line, and one onboard mobile station on the train. The telco said it confirmed successful handover while maintaining those 100 Mbps or higher data rates.

“The trials confirmed that the newly developed 5G technology can stably transmit both 4K and 8K high-definition video in the ALFA-X running at 360km/h,” DoCoMo said. “Notably, the advanced capabilities of this new technology are expected to open up a wide range of high-value services for customers travelling on high-speed trains.”

And therein lies the rub. It’s all very well operators showing us just how much data we could use while travelling at super-high speeds, should we have the transport ecosystem available to us, that is. But it’s quite another to ensure that customers are willing to pay for actual services that use that infrastructure, rather than relying on ever-increasing data bundles at ever-diminishing returns.

Competition is growing fierce in Japan, with the big three having newcomer Rakuten Mobile and government-induced price squeezes to contend with. They have to find new ways of making high-speed mobile pay.