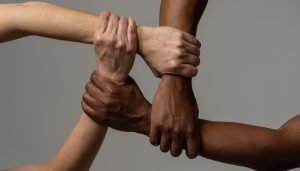 Google and Amazon can add growing unionization to the list of challenges to their dominance of the digital economy.

The former has Switzerland-based UNI Global Union to thank for this new front in their war, which has combined with a nascent US Google labour union (whose first act was to state its disapproval of fascism) to form Alpha Global (AG). The stated aim of AG is to ‘change Alphabet’ and ‘make the company better’. What’s not to like?

As those aims indicate, this isn’t just an old-school union, focused on protecting workers from exploitation and that sort of thing. AG has its eyes in weightier matters. “We want to see a world in which Alphabet respects human and labour rights across its global operations and supply chain,” opens the founding statement, which later adds “Unfortunately, Alphabet is also a creator of inequalities, implicated in sexual harassment and oppression of sexual minorities and people of colour.” Implicated in, but presumably not convicted of, or they would have said so.

While Google has had more than its fair share of activist employees for some time, the recent event that seems to have done most to rattle their cage is the sacking of AI ethics researcher Timnit Gebru, who had apparently written a paper highlighting issues with natural language processing technology, including its potential for embedded bias. It was viewed by some that Gebru was sacked for doing the right thing, a suspicion augmented by the recent similar treatment of another Google AI Ethics researcher, Margaret Mitchell.

The Alphabet Workers Union managed to find time in its struggle against fascism to issue at statement expressing concern about Mitchell, who Google seems to suspect of gathering evidence to assist Gebru. Mitchell has also publicly inferred Google indulges in racial tokenism.

Say you have a problem with consistently alienating Black women and have caused serious damage in their lives.
You could:
A) try to undo that damage
B) try to find more Black people to like you (the tokenism approach).
Good luck…..https://t.co/rrhL8AQDIF

At the very least Google seems to be a victim of its own corporate virtue-signalling. When corporations start adopting moral postures there’s always the danger their employees will take them literally.

“It is a place where many workers came to change the world—to make it more democratic—only to find Alphabet suppressing speech and cracking down on worker organizing while consolidating monopolistic power,” says the AG statement, before concluding “Alphabet has long lost its commitment of “Don’t be evil,” but we haven’t. Together, we will hold Alphabet accountable. Together, we will change Alphabet.”

Meanwhile fellow master of the digital universe Amazon is facing union troubles of its own. At one of its Alabama locations workers are going to vote on whether to unionise on 8 February. The website indicates this is a more traditional movement, concerned with working conditions, benefits, etc. Their position on fascism unclear at this stage, but we presume they’re not fans of it.

The grass roots movement seems to be getting national attention, with the NFL Players Association expressing solidarity. Amazon is presumably appalled at the prospect of having to deal with things like strikes and collective bargaining, but an apparent insistence that the Alabama unionists conduct their ballot in person, despite the  dangers that poses during the pandemic isn’t helping its cause.

We’re not aware of similar movements among the employees of other US internet giants, but these things have a way of snowballing. With antitrust authorities around the world looking closely at the immense power just a few US companies have over the digital sphere, and the US government in trust-busting mood, the last thing they needed was organised internal dissent. But that’s what they’ve got and, with the way they’ve been acting recently, they’re fast running out of allies.