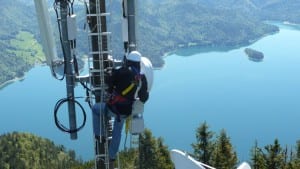 Deutsche Telekom has signed a letter of intent with Telefonica that will see the pair implement active network sharing at several hundred selected antenna sites to fill grey spots, or areas in which not all operators have 4G coverage. Meanwhile, Telefonica has signed a similar agreement with Vodafone, also covering an unspecified number of hundreds of sites.

“In places where so far only one operator can provide coverage to the residents, the partners will agree to provide mutual network access for the benefit of their customers,” Telefonica said on Wednesday.

The deals follow on from a broader agreement signed by Deutsche Telekom and Vodafone a year ago with a view to addressing LTE grey spots in as many as 4,000 rural locations and along traffic routes. It also builds on a passive network-sharing deal brokered by the big three in late 2019, which saw them pledge to address up to 6,000 white spots, or locations that did not have mobile coverage at all, by sharing masts, power supply and so forth.

The active network-sharing deals with Deutsche Telekom and Vodafone constitute “a further step to cost-effectively increase coverage and network quality for the benefit of customers,” Telefonica said, in a statement.

Cost is doubtless a big factor here, as mobile operators everywhere face the requirement for more sites and hefty spending on additional spectrum. But it’s not just about benefiting customers. The telcos must adhere to relatively stringent regulatory rules on coverage, and sharing sites is one way to do that. There is also a competitive angle too, with new player 1&1 Drillisch set to make its mark on the market in the near future. The incumbents run the risk of losing customers to the newcomer, and that risk intensifies if customers are already dissatisfied.

All of which goes some way to explaining why mobile operators are starting to embrace sharing, having once been fiercely protective of their separate infrastructures.

It’s a similar story in the fixed-line market, where Deutsche Telekom recently agreed a fibre-to-the-home (FTTH) wholesale deal with Telefonica, having previously expressed serious concerns about the competitive disadvantages of sharing – or, more accurately, being forced to share – fibre infrastructure.

For Telefonica, the active mobile network-sharing agreements form part of its growth plan for its German operations, which also includes 5G coverage of 30% of households by the end of this year and a nationwide network by 2025. It reaffirmed its target of 5% growth over the three years to 2022 and an unspecified increasing in profitability, despite Covid-related headwinds. The operator said it will invest more in its network in 2021 than ever before, benefiting from greater financial flexibility following the sale of its Telxius towers business.

“The further expansion of our strong O2 network and the continued improvement of our offerings for residential and especially business customers, mainly through bundled mobile and fixed products, are key to profitable growth,” said said Markus Haas, CEO of Telefónica Deutschland/O2.

And they will help to stave off the threat of new competition, of course.