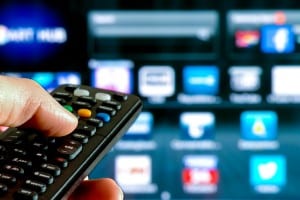 The BBC has announced that its iPlayer online streaming service experienced a huge surge in viewing in the first full week of 2021…and it’s a pretty safe bet that no one is surprised to hear that.

With the UK entering its third national lockdown at the start of that week, the list of alternatives to streaming some kind of video to while away the dark, cold and wet January evenings isn’t exactly huge. Add in the pressures of stretched work schedules and home schooling, and many of us simply do not have the energy to – to borrow a phrase from the ’80s – “just switch off the television set and go and do something less boring instead.”

We have many platforms to choose from, from pay TV services to YouTube videos, which are doubtless all seeing upticks in usage. It stands to reason that the national broadcaster’s catch-up service would see viewing rocket.

We can’t actually be sure if we’re talking about a rocket or a more gentle ascent, since the Beeb didn’t provide comparative figures. However, it did say that the week in question broke records with viewers streaming 162 million programmes…which does sound like a lot, when you consider it equates to about two and a half BBC shows per head of population. Apparently we “flocked” to watch shows like The Serpent, A Perfect Planet, Traces and EastEnders.

“That week also saw a record 4.1 million people aged under-35 signed into their BBC account to watch BBC iPlayer,” the broadcaster said.

It also shared data on viewing patterns for 2020, with viewers seeking out drama and entertainment shows in particular. The top four most popular box sets last year were Normal People, Killing Eve, Masterchef, and Strictly Come Dancing, although the list doesn’t include news, sport or kids TV.

“More people than ever are using BBC iPlayer and they are using it more often, with a staggering 5.8 billion streams in 2020,” said Dan McGolpin, controller of BBC iPlayer. That’s an increase of 31% on 2019.

Naturally, the 2020 figures are also impacted to a sizeable extent by Covid-19, which altered people’s lifestyles and viewing habits, as well as affecting TV filming schedules. But the shift away from live TV and towards catch-up services, video-on-demand and so forth has been underway for some years and will continue.

The pandemic made its mark on TV, but the trend was already set.