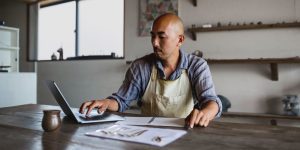 Small and medium sized businesses are being especially hard hit by the continual lockdowns, so Vodafone UK is smart to push the boat out for them.

The press release talks of giving small businesses free broadband for 2021. While this is technically true, it only comes if they commit to a three year broadband contract, the first year of which they don’t get charged for. That’s still a decent deal and will presumably come in handy for those many businesses struggling to pay their bills in this unique time.

Vodafone cites some research that found the percentage of small businesses running entirely online has doubled during the Covid-19 pandemic, from 27% to 55%, and that 71% of small businesses say they are now more reliant on broadband than before the pandemic. If anything it’s surprising those numbers aren’t even higher, given how difficult it has been to leave the house for the past year. Sadly 2021 looks set to bring more of the same, so those numbers probably will continue to rise.

We spoke to Andrew Stevens, Head of Small Business at Vodafone UK, and he said he’s seeing a strong embrace of digital transformation by the SME sector, with the pandemic acting as a major accelerator if that process. It seems Vodafone has identified this as the right time to make bold strategic moves such as this, not only seeking to increase its SME broadband market share, but also helping to ensure there is a market to address in the first place.

While the Vodafone press release does open by talking of supporting small businesses (as opposed to doing business with them), it’s to Vodafone’s credit that it hasn’t laboured the philanthropic angle too much. Many other companies saw the opportunity for easy PR wins following the political pressure to ensure all UK kids are capable of accessing home schooling. It’s great that they’re doing their bit, but any claims to altruism are sacrificed when they issue a press release about it.

As is so often the case, the SME sector has been hit hard from all sides during this artificial recession. Big corporates are just easier for governments to deal with and also have the capital raising capacity to bridge sudden cashflow shocks. Many entrepreneurs don’t even qualify for the public cash that has been chucked around like confetti, so they will presumably be grateful for any help they get. That makes this a smart business move by Vodafone.

Trump administration bans Xiaomi, other Chinese companies
Masmovil wins Portugal newcomer spectrum
Half of Australians could get Telstra 5G if they want it
Qualcomm to buy Nuvia for $1.4b, with an eye toward next-gen computing
Nokia teams with Google Cloud on 5G core, edge