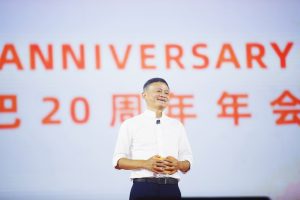 In a terse statement released by Xinhua, the state news agency and one of China’s major propaganda outlets, the State Administration for Market Regulation said it has started an investigation into Alibaba Group after receiving complaints against the company’s monopolistic practices including demanding merchants’ loyalty by forcing them to “pick one out of two” to do e-commerce.

In a separate but apparently concerted move, the Securities Regulatory Commission, China’s regulator overseeing the securities industry, and People’s Bank of China, the central bank, jointly invited Ant Financial to a discussion. Ant Financial is an Alibaba affiliated company which owns and operates Alipay, the preferred online payment tool for merchants on Alibaba platforms.

The latest developments in China’s efforts to take on its home-grown internet giants are not entirely unexpected. In November the same market regulator issued a draft regulation which targeted at different sorts of irregularities of how online businesses are conducted, plunging Hong Kong’s Hang Seng Tech Index, which is heavily featured by China-based internet companies, by 11% in two days, wiping out nearly $300 billion values.

That draft regulation was published a few days after Chinese authorities halted what would have become the world’s largest IPO by Ant Financial. The decision to pull the plug came a few days after Jack Ma, founder of Alibaba who also owns Ant Financial, made a fiery speech attacking the current financial regulation regime, likening it to running a pawn shop. The speech has been seen as an insult to President Xi’s signature campaign to control financial risks.

Alibaba has been heralded as a champion of China’s internet innovations and Jack Ma has long been a poster boy for both rags-to-riches entrepreneurial success and well-behaving businessmen in the eyes of the government. Two years ago, the state media disclosed that Ma has been a member of the Communist Party all along. His abrupt fall from grace, despite offering Ant Financial to the government to salvage its IPO, should ring an alarm bell to other successful businessmen including those running high-flying technology companies. If any lesson can be drawn from the Alibaba drama it will be good behaviours are not enough. Better behaviours are required, including never offend the supreme leader.

Baidu and Tencent, the other two of China’s internet holy trinity that, together with Alibaba, have been collectively called BAT, should be on alert. It would be a big surprise if Alibaba’s alleged malpractices have not been copied by its competitors. Tencent, for example, have almost identical financial products as what Ant is operating, including online payment, consumer loans, wealth management, insurance, credit rating, even digital banking service.

Through these financial products as well as search and social media apps, these companies have access to the amount of consumer data even the government cannot rival. For example, WeChat has become a ubiquitous tool from online shopping to coronavirus tracing. Alibaba and Tencent have also been heavily investing in the next crop of China’s internet successes. This chart by Bloomberg (via Seeking Alpha) shows the extent of Alibaba’s (including Ant) and Tencent’s investment in other high-value internet companies. Their web of wealth creation and data access make them ideal targets for the government to rein in. 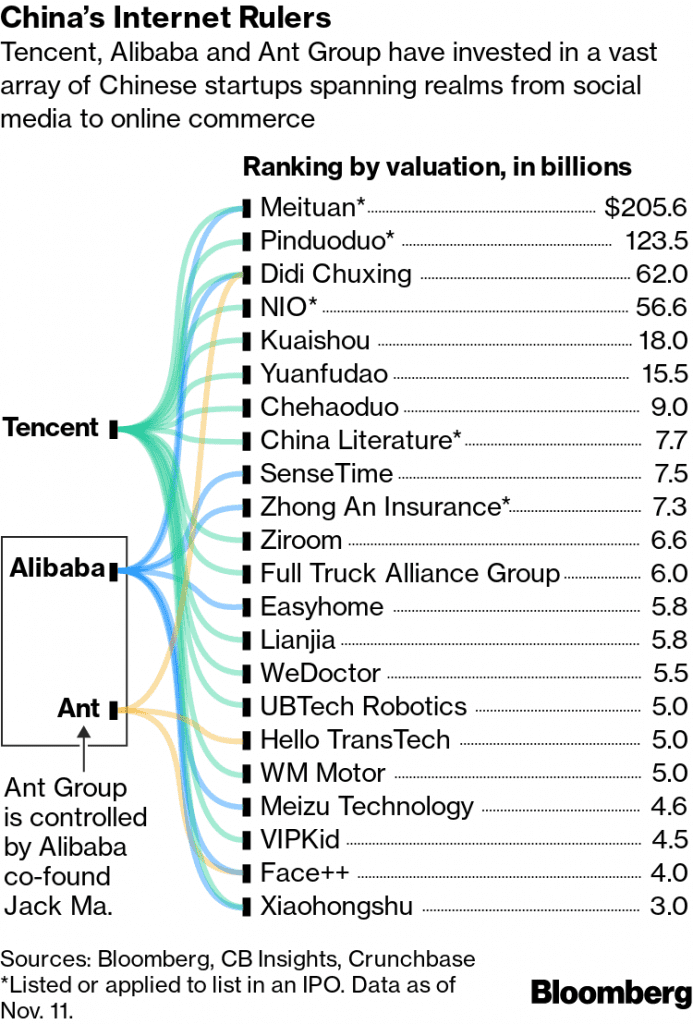