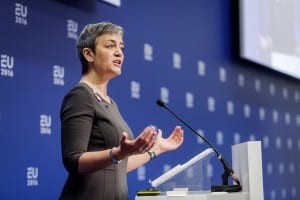 The European Commission has approved Google’s plan to acquire Fitbit after deeming the search giant’s commitments have satisfied competition and consumer protection requirements.

In November 2019 Google announced that it intended to buy Fitbit, the San Francisco-based health and wearable company, for $2.1 billion. The deal needs to be approved by a number of regulators before it can materialise, the European Union being one of them. The EU launched an investigation on competition concerns in August. After nearly five months (slightly more than the 90 working days the regulator set for itself), the Commission concluded that, with a set of commitments from Google, the deal can go ahead, provided a monitoring trustee is put in place to ensure the commitments are properly implemented.

“We can approve the proposed acquisition of Fitbit by Google because the commitments will ensure that the market for wearables and the nascent digital health space will remain open and competitive,” said Margrethe Vestager, the Commissioner for Competition (pictured). “The commitments will determine how Google can use the data collected for ad purposes, how interoperability between competing wearables and Android will be safeguarded and how users can continue to share health and fitness data, if they choose to.”

Specifically, to address the regulator’s concerns, Google have made a broad range of commitments, referred to by Vestager in her statement, that will apply to users and businesses in the European Economic Area (‘EEA’, including the 27 EU member states plus Iceland, Liechtenstein, and Norway) and will remain valid for ten years. They largely fall into two categories: ads commitments and API access commitments.

The biggest concern from the Commission was on Google’s dominance in supply of online search advertising services which could be further strengthened with the acquisition of Fitbit’s user data. To address this concern, Google committed not to use the health and wellness data collected from Fitbit devices for Google Ads, to store Fitbit data in a “data silo” separate from other Google data used for advertising, and to ensure EEA users will have an effective choice to grant or deny the use of their health and wellness data stored in their Google Account or Fitbit Account. These commitments related to ads may be extended by the Commission for up to another ten years if it sees it necessary.

Google also commits to continue to grant other software companies free access to Fitbit’s Web API, as well as equal treatment of other Android OEMs when it comes to access to Android APIs.

With regard to competition in the wearable market, the Commission recognised that Fitbit has a limited market share in Europe, and its acquisition by Google will not pose a threat so big that it could hinder competition. There are plenty of other brands operating in the European market, including Apple, Garmin, and Samsung.

The Commission has also heard privacy concerns during the investigation that a deal like this would make it even less transparent for users to track how their health data is being used. However, the Commission believes such concerns fall out of the scope of the investigation, and is being addressed by other existing regulation regimes, for example GDPR.

With this decision Google may have cleared a big hurdle, but it is not all done yet. The deal still needs to be approved by the American regulators (both the DoJ and the FTC have expressed antitrust concerns). As a matter of fact, with Fitbit’s much stronger market position in its home market, this may well be a higher hurdle for Google to overcome.