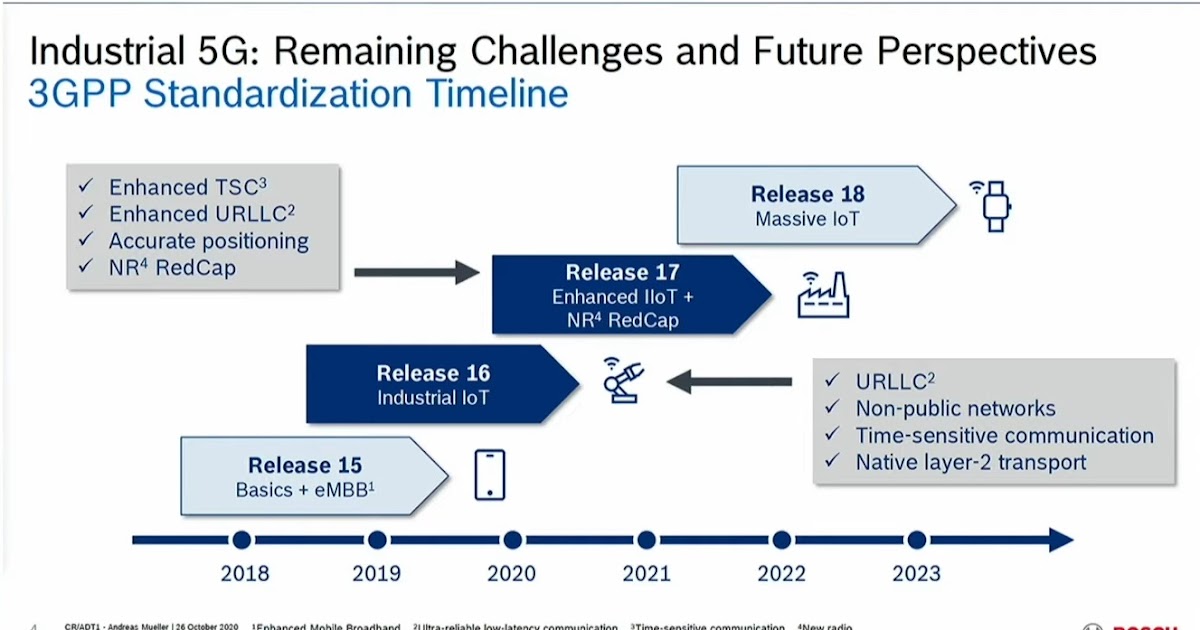 Andreas Mueller, Head of communication and network technology at Bosch Corporate Research and Chair of 5G ACIA recently spoke at ‘What Next for Wireless Infrastructure Summit’ by TelecomTV about Industrial 5G. The following is paraphrased from his presentation ‘Industrial 5G: Remaining challenges and future perspectives’ which is embedded below:

5G has the potential to become the central nervous system of the factory of the future, enabling unprecedented levels of flexibility, efficiency, productivity and also ease of use.  At the same time it’s also a very special application domain so in many cases there are very demanding QoS requirements.

Industrial applications have multi-faceted requirements where one case may require very low latencies and high reliabilities for instance, while for others we may need very high data rates (for example HD cameras). There is no single use case with a single set of requirements but many different use cases with very diverse requirements which also have to be supported in many cases at the very same time.

As we need only a local network with local connectivity, this performance is required only in a very controlled environment; inside a factory, inside a plant. This allows for specific optimizations and makes certain things easier but we also always have brownfields deployments in many cases that means we have to live what we have in place today so that’s typically wired communication in some cases it’s wi-fi and similar wireless solutions and we have to be able to smoothly integrate a 5G network into this existing infrastructure

The developments towards Industrial 5G started about three years ago i would say and in the meantime it really has become a hot topic everybody is talking about industrial 5G. It has become a focused topic in standardization in 3GPP and some key capabilities already have been standardized which have been briefly outlined in the presentation.

Good progress has also been made in the ecosystem development so we’ve established the 5G Alliance for Connected Industries and Automation two and a half years ago which serves as a global forum for bringing all relevant stakeholders together and for driving industrial 5G and we have 76 members today which includes major players from the telco industry but also from the industrial domain and also of course some universities and so on. We have seen the advent of non-public networks (NPN) so for the first time it will be possible for a manufacturers to deploy and operate such non-public networks inside a factory which are to some extent decoupled from the public networks. 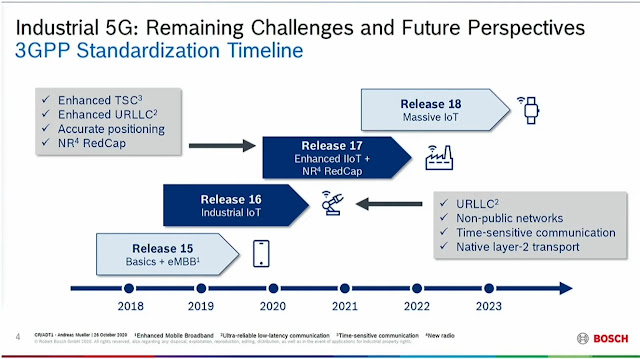 If we look at the standardization timeline this is what you get. The first version of 5G release 15 of 3GPP was approved mid last year and it still had a very strong focus on consumer application and enhanced mobile broadband. If you buy 5G today, this is what you get then. Release-16 has for the first time had a very strong focus on industrial applications this has been approved in June this year and it includes features like ultra reliable low latency communication, non-public networks, time-sensitive communication. It means support for time-sensitive networking 5G and also native layer 2 transport so that we don’t necessarily need internet protocol but we can directly transmit ethernet frames over a 5G network which again is very important especially for the industrial domain.

Release 17 is currently underway and it will come along with several enhancements of these features. It also has a stronger focus on positioning which is again very important in manufacturing because knowing where things are is a very valuable information and it will be in this new transmission mode called NR RedCap which is somewhere somewhere in between this high-end mobile broadband mode and also this low-end a massive machine type communication and this might be especially suitable for industrial sensors for example and then of course the journey will continue with Release 18 which is still being defined but with a high probability i would say it will more focus on massive iot applications that means tiny little sensors for example which have to be connected using very low energy and low costs and not just the natural next step. 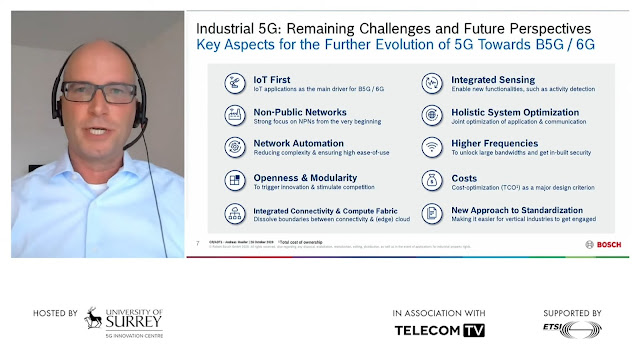 Here is a list of the features that can be prioritised for future 5G releases or even for 6G. As Release-17 has just been delayed slightly, quite possible that some of the features expected in 5G may get pushed on to Beyond 5G and even 6G.

Here is the embedded talk

An interview by Dr. Andreas Müller regarding Bosch 5G activities is available here (in German)