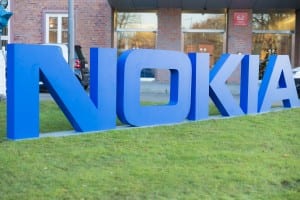 The Finnish telecoms vendor has provided more details about its new strategy and operating mode, which were first unveiled in October.

As was communicated earlier Nokia has shared more details on its new strategy, operating mode, as well as personnel changes in the leadership, at this mid-point update.

The key mission of the new strategy, more clearly articulated this time, is to align the organisation to work towards the leadership in delivering what Nokia calls “critical networks”. These refer to those networks that are largely the crossover between the traditional telco networks and the traditional datacentre-based webscale networks. Therefore, they will need the advanced properties (intelligent, automated, self-optimised, on-demand) that can “run mission-critical services for companies and societies”, as Nokia puts it. In turn, by aiming to serve these networks, Nokia is extending its target market segments from primarily telecom operators to including enterprises, webscalers, as well as the conventional CSPs.

“We are well positioned to be a trusted partner for critical networks. We are experienced in creating both carrier-grade performance networks and working with the world’s most demanding webscales,” said Pekka Lundmark, Nokia’s President and CEO. “We have a strong position in technologies that are important for critical networks, such as open and virtualized radio access networks and we are on course for a 100% cloud-native software portfolio.”

To achieve these target, Nokia is making a clean break from the “end-to-end solution” strategy, pursued by the previous management, and is re-organised into four business groups (plus a handful of corporate functions), as was announced in October. Mobile Networks, which roughly generates half of the company’s total revenue (at an annual run rate of about €10 billion), includes the RAN business as well as network planning, deployment, management, optimisation, and technical support. This is the group that is tasked to win leadership in 5G, which has proved elusive for Nokia, as well as leadership in O-RAN and vRAN, in which Nokia has pledged to make significant R&D investment.

Network Infrastructure (called “IP and Fixed Networks” when the new setup was announced in October), which generates about €7 billion revenue, is largely what Nokia got from the Alcatel-Lucent acquisition, including IP, optical, fixed access, and subsea networks. Cloud and Network Services, bringing in about €3 billion annually, is focused on software business including corporate solutions and is tasked to capture the “as-a-service” opportunities. Nokia Technologies, with an annual income of about €1.4 billion, will continue to monetise Nokia’s patent portfolio through patent, technology, and brand licensing.

Customer Experience, the sales and marketing organisation, will serve all the four business lines. When the new operating model officially comes into effect in the new year, Nokia’s organisation will look like this: 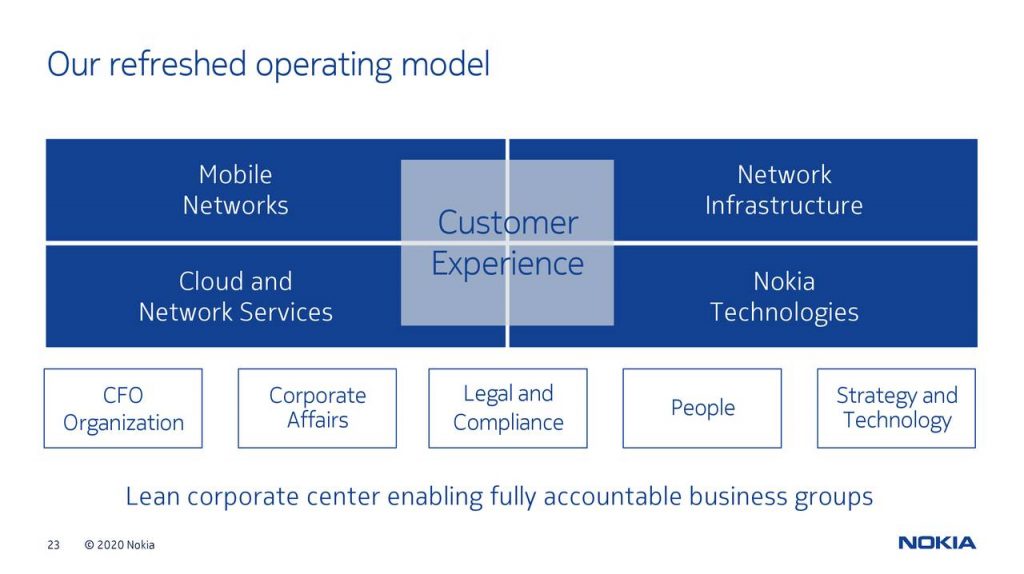 Nokia reiterated its financial guidance of 7-10% operating margin in 2021 but with more details for the different business lines. Mobile Networks, the largest business group, is only expected to break even next year, suggesting Nokia is willing to take some profit hit to win 5G market share. High single digit and mid single digit operating margins are expected from Network Infrastructure and Cloud and Network Services respectively, while Nokia Technologies, with an 83% operating margin in Q3 thanks to the nature of its business, is expected to deliver “slight improvement” over this year.

With the new strategy and the drive for lean corporate centre, about 14,000 people will be transferred from corporate to the business groups. Meanwhile, a number of senior executives are shown the door. The Group Leadership Team will reduce its size from the current 17 members to 11. In addition to the confirmed departures of Barry French (Chief Marketing Office), Marcus Weldon (CTO and President of Bell Labs), and Sanjay Goel (President of Global Services and Nokia Operations), the appointment of Nishant Batra as Chief Strategy and Technology Officer this morning also confirmed the exit for Gabriela Styf Sjöman, the current Chief Strategy Officer. Batra, coming from Veoneer, a Swedish automotive technology company, had a long career at Ericsson earlier.

The final milestone of Nokia’s strategy and operating model communication will take place in March next year, at the company’s Capital Market Day event.