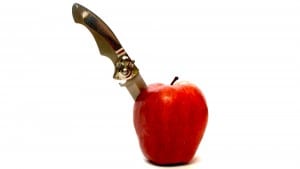 Apple made a bunch of claims about the water resistance of some iPhones, but the Italian Antitrust Authority didn’t like them and has fined Apple €10 million accordingly.

In promoting the iPhone 8, iPhone 8 Plus, iPhone XR, iPhone XS, iPhone XS Max, iPhone 11, iPhone 11pro and iPhone 11 pro Max in Italy, Apple said they were water resistant for a maximum depth of 1-4 metres, depending on the model, and up to 30 minutes. However, Apple failed to mention those claims are only true under controlled conditions, using static, pure water.

Those don’t match the likely real-world circumstances in which the devices’ water resistance may be tested, such as dropping them down the toilet or jumping in the sea, so that’s deception number one.

On top of that, the paperwork that came with the phones said ‘The guarantee does not cover damage caused by liquids’. Not only did that further undermine the above claims, it also didn’t specify whether it applied to a conventional guarantee or a legal one. To add insult to injury, it seems Apple also refused to provide warranty assistance when those iPhone models were damaged due to the introduction of water or other liquids.

On the whole this seems like a fairly comprehensive betrayal of its Italian customers by Apple. Don’t make the claim if it’s not true and, if it is, then don’t just say ‘tough luck’ when the advertised feature fails. All things considered Apple seems to have got off pretty lightly with just a €10 million fine, but it had better hope the European Commission doesn’t read this story.

China culls unprofitable 5G use cases as it narrows focus
What is a Virtual Network Function?
WiCipedia: The ‘broken rungs’ of women’s careers
Arm wrestling with Intel over open RAN as it sets up 5G lab
Verizon and Nissan demonstrate edge computing for improved connected-vehicle communication