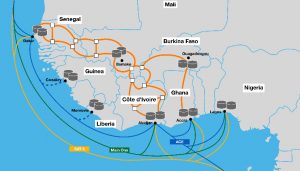 At AfricaTech, Orange formally launched its pan-West African network, designed to remove the need for complex cross-border interconnections in the region.

The Djoliba network is run and maintained from Dakar in Senegal, and connects a further seven countries: Burkina Faso, Côte d’Ivoire, Ghana, Guinea, Liberia, Mali and Nigeria. The infrastructure is natively interconnected with the domestic networks within those eight countries, which, according to Orange, is something of a game-changer for the region.

The lack of a cross-border network in West Africa meant that in order to provide a service between cities in separate countries, operators had to bring together services from various different providers using infrastructure that interconnected at a national border. A pan-regional network significantly simplifies that process.

And simpler networking means improved access to the services that run on top.

“With Djoliba, local populations will be able to access healthcare or educational services more easily, as well as the applications offered by cloud computing,” said Alioune Ndiaye, CEO Orange Middle East and Africa, in a canned statement that was peppered with soundbites on Orange’s contribution to the development of infrastructure and the digital economy in Africa.

The telco has a point though. Djoliba covers a potential 330 million inhabitants, according to Orange, or around a quarter of the population of Africa. And presumably there are many businesses located in the region that will benefit too.

The network can support superfast broadband provision of up to 100 Gbps. It comprises 10,000 km of terrestrial fibre and a further 10,000 km of subsea cables, and connects to Orange’s international networks. It covers 16 points of presence, supported by 155 technical sites, and connects 300 PoPs in Europe, the Americas and Asia.

Orange notes that new Djoliba customers will be able to access its group platforms “and benefit from the whole range of offers marketed by Orange in Africa,” such as IP transit, mobile service platforms, data centre hosting, VPN and so forth.

So as well as improving connectivity in the region, Djoliba opens up a whole new potential customer base for Orange too.

That gels with an element of the operator’s latest five-year plan, unveiled late last year. Under the Engage2025 strategy, Orange identified the Middle East and Africa as a key growth driver for the group and pledged to focus on rolling out new infrastructure and services there. It opened a new MEA headquarters in Casablanca, Morocco, earlier this year in support of that pledge.

“I’d like to signal the excellent dynamic in Africa and the Middle East which returned to revenue growth of more than 5%, mainly thanks to mobile data and renewed activity at Orange Money,” Orange chief executive Stéphane Richard said in a statement accompanying the group’s third-quarter results presentation a fortnight ago. The region posted 5.1% year-on-year growth in revenue to €1.47 billion in Q3, which equates to 14% of the group’s total turnover.

Boosting connectivity in a key area like West Africa can only help to support the telcos ambitions for the region as a whole.