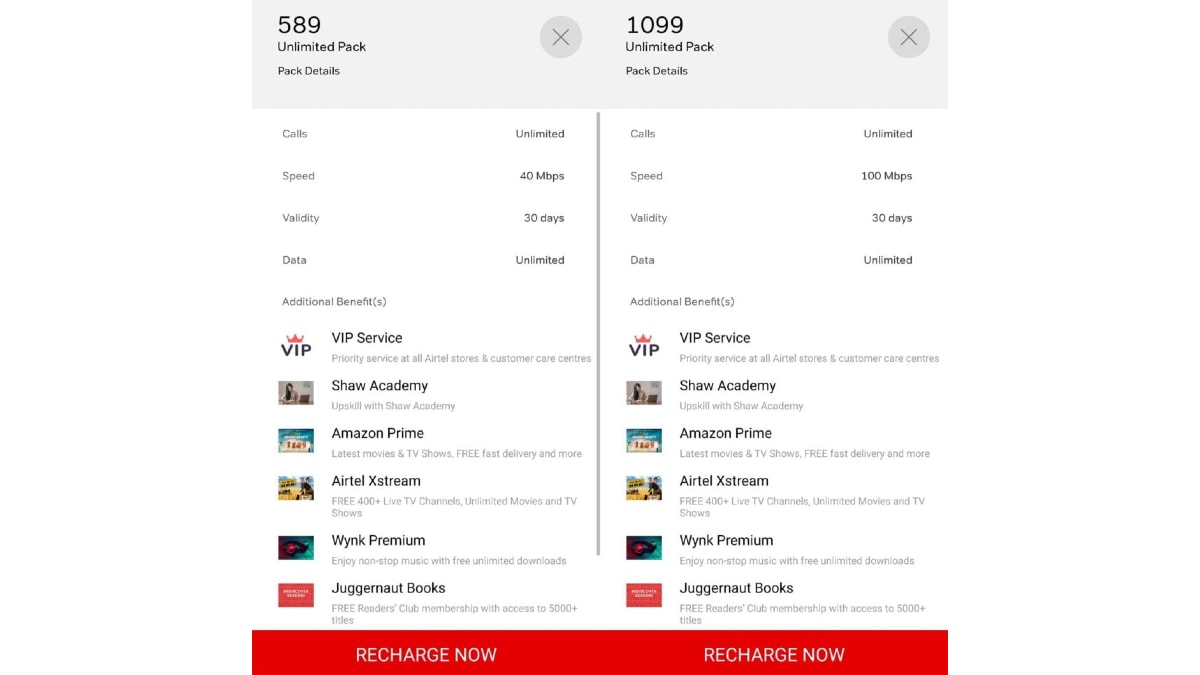 This revision is not reflecting on the website yet, nor is it live in our Airtel Thanks app. OnlyTech reports that only a few users are able to see it in the Airtel Thanks app for now. Reportedly, the Airtel Rs. 499 broadband plan has been upgraded to offer Amazon Prime subscription as well. The price of this plan has been revised to Rs. 589 and it also offers unlimited data, up to 40Mbps speed, and unlimited local/STD calls. It also comes with Airtel Xstream app subscription.

Similarly, the Rs. 799 broadband plan has been reportedly revised to Rs. 943, and it offers Amazon Prime subscription as well. This plan comes bundled with unlimited data, up to 100Mbps speed, and unlimited local/STD calls. It also comes with Airtel Xstream app subscription. OnlyTech reports that while the app lists the price of this plan as Rs. 1,099, its actual price at checkout is Rs. 943.

The report also says that the Amazon Prime benefit is only offered on these revised plans if purchased on a monthly basis, and it is not listed for semi-annual or annual purchases. These new revised plans haven’t been rolled out broadly and are live for very few people. Existing Airtel Xstream Fiber users may have more chances of seeing this in the Airtel Thanks app than potential new customers.

Airtel recently also started offering ‘unlimited high-speed Internet access’ on all of its broadband plans after arch-rival Reliance Jio did a huge revamp of its Jio Fiber broadband plans.

Which are the best truly wireless earphones under Rs. 10,000? We discussed this on Orbital, our weekly technology podcast, which you can subscribe to via Apple Podcasts, Google Podcasts, or RSS, download the episode, or just hit the play button below.

Affiliate links may be automatically generated – see our ethics statement for details.