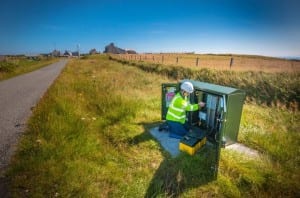 The UK is making steady, if not world-beating, progress in the rollout of full fibre, but residents’ ability to connect is still highly dependent on where they live.

New figures from Ofcom show that 14% of UK homes had access to full fibre broadband, as of May this year. That’s an increase of two percentage points since January, which is hardly astronomical growth, but is certainly a step in the right direction.

Or it is for some people, at least.

It amounts to an additional 670,000 homes. “This is a result of increased rollout both from the expansion of existing broadband networks as well as the inclusion in our analysis of companies building entirely new fibre networks,” the regulator said.

“This has been driven predominantly by increases in the availability of both Virgin Media’s cable network and full fibre deployments. In some, predominantly urban areas, new fibre networks are being deployed in areas with existing ultrafast coverage, and hence the increases in full fibre availability do not necessarily result in a corresponding increase of ultrafast coverage,” Ofcom said.

Translation: places with existing high-speed broadband are getting higher speeds, full fibre, and potentially an increased choice of provider. Draw your own conclusions as to what that means for the many UK locations that do not fall into this category or live in an area where various government support schemes are furthering the availability of high-speed broadband.

For those in the middle, access to full fibre is something of a lottery. As it stands, the UK is peppered with localised deployments from altnets either cherry-picking locations or having been set up specifically to serve a certain area, or addressing a particular segment of the housing market.

Community Fibre is one such example. Its mission is to provide more affordable fibre broadband to communities across London and this summer it revealed it had passed 100,000 London homes, 84% of which were social housing. This week it announced the completion of a project to roll out full fibre to all council-owned homes across the London borough of Sutton, in partnership with Sutton Council.

“We believe that everyone deserves better broadband, therefore our packages are affordable with no surprise price rises throughout any of our contracts. Our approach will be crucial to help build a more inclusive digital future for Sutton and across London communities,” said Graeme Oxby, Community Fibre CEO, alongside some now-familiar standard comments about the importance of connectivity in the post-lockdown environment.

While the Sutton deployment is hardly a headline-grabber in its own right, it forms part of a wider rollout in the UK capital that will be worth keeping an eye on, in no small part due to the pedigree of the telecoms executives involved in it, in one way or another.

Oxby, of course, has a lengthy UK telecoms CV, having recently served as chief executive of MVNO Lebara and previously held senior roles at Liberty Global and subsidiary Virgin Media, and 3UK.

In July the company announced that Olaf Swantee, of EE and Sunrise fame, would join Community Fibre as executive chairman following the completion of a £400 million funding injection from PE firm Warburg Pincus and investment group DTCP. Swantee joined Warburg Pincus as a strategic adviser earlier this year.

Also quoted in that announcement was Rene Obermann, former CEO of Deutsche Telekom and Ziggo, who serves as co-head of Europe and Managing Director of Warburg Pincus Deutschland. “Community Fibre aims to close the digital divide and promote social inclusion,” Obermann said. “Affordable high speed internet for London’s social housing, and free Gigafast connection to community centres and libraries will create limitless opportunities in education, recruitment, and training, with one click of a button.”

It’s a noble ambition, and clearly one with the promise of a financial return for investors. But no matter what Community Fibre’s target market is, rolling out fibre across London equals overbuild. So while Ofcom’s figures will doubtless continue to show growth in ultrafast broadband availability, there will remain a divide between the haves and have nots; while some have a number of high-speed broadband providers to choose from, others have none at all.

3 Things to know when transitioning to mmWave
TelcoDR commits $1B to telco transformation company
Verizon SVP Debika Bhattacharya on the credibility conundrum for women in comms
What’s the same and what’s different?
Auction 110 update: $18.7 billion and counting