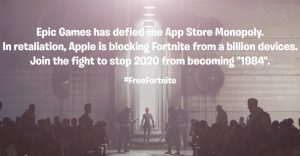 After both Apple and Google removed Epic from the App Store and Play Store, the online game developer has filed lawsuits against both, claiming they operate monopolies.

Earlier this week, Epic introduced new channels for in-app purchases for its most popular title Fortnite. The payment channel circumnavigated the payment processing platforms in the Apple and Google app markets, and therefore also the commissions paid. As a result, Fortnite was removed from both the App Store and the Play Store, with the duo suggesting Epic broke the rules.

Almost immediately, Epic filed lawsuits, suggesting the team intended to get banned from both marketplaces as ammunition for the legal proceedings. Apple and Google seemingly played their part in the Epic strategy perfectly, though let’s not forget these are very well practised legal departments. Both lawsuits were filed in the North District of California.

“Apple’s founder Steve Jobs introduced the first showing of the 1984 advertisement by explaining, “it appears IBM wants it all. Apple is perceived to be the only hope to offer IBM a run for its money. Will Big Blue dominate the entire computer industry? The entire information age? Was George Orwell right about 1984?”.

“Fast forward to 2020, and Apple has become what it once railed against: the behemoth seeking to control markets, block competition, and stifle innovation. Apple is bigger, more powerful, more entrenched, and more pernicious than the monopolists of yesteryear. At a market cap of nearly $2 trillion, Apple’s size and reach far exceeds that of any technology monopolist in history.”

A similar rhetoric has also been used with the Google lawsuit. In pointing to the old company slogan, Don’t Be Evil, Epic is suggesting Google has lost its way and wields unreasonable power in the Android ecosystem, as Apple does for iOS.

The influence and control of both Apple and Google in the app economy has been questioned more frequently in recent months, and it does appear the weight of opinion in against the powerful internet giants.

Aside from these lawsuits, Spotify, Rakuten, Hey and Telegram have filed complaints against Apple in Europe, where the European Commission has already launched an antitrust investigation. In the US, the Subcommittee on Antitrust, Commercial and Administrative Law in Congress is probing whether Silicon Valley has too much influence in the digital economy. The Apple and Google app marketplaces have been factored into this investigation.

One does start to get the feeling Apple and Google are fighting against the tide.

As has been the case with the other complaints against Apple and Google’s position in the app economy, Epic is pointing to absolute control over the distribution and monetization of apps. Although Apple and Google maintain there is competition, if you want to engage iPhone users, you have to abide by Apple’s rules, the same situation for those developers who want to engage Android users. Semantics aside, these app ecosystems are effectively monopolies.

When you consider how sensitive the European Commission is on competition issues, it becomes difficult to believe the 30% commission placed on app developers will remain. It does seem unjustified, an unfair fee to charge on the sole entry point to a marketplace. Whether the US takes the same position remains to be seen, authorities on that side of the Atlantic are not as consumer conscious.

Through these lawsuits, Epic is not pursuing financial gain or any reimbursement from either party, the aim is to take down the strict regimes which are in place overseeing these app marketplaces.

Apple and Google have been incredibly influential in the digital economy, and without the efforts of these two we suspect the app economy would not have developed to the levels it is at today. That said, business is fickle and those who realised the benefits of scale in yesteryear are hitting back today. Would Fortnite have been the same success if it had been forced to engage consumers through its own channels at the very beginning? We doubt it, but that will not be brought up voluntarily.