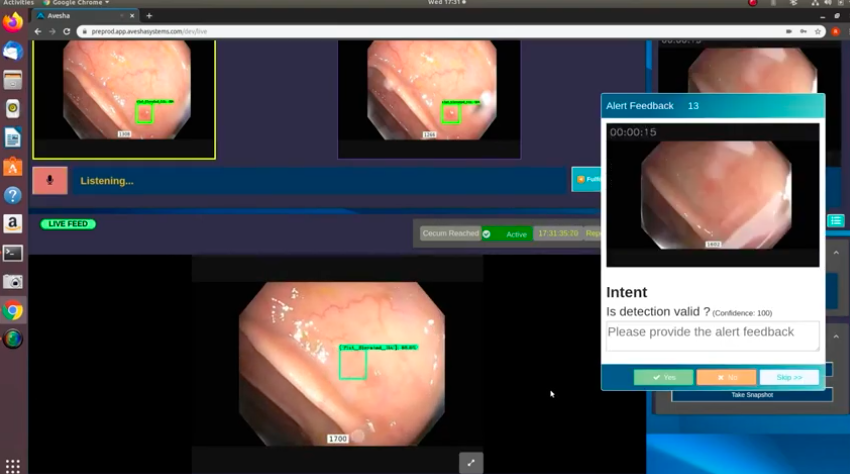 Identifying colon polyps in real time as a scope moves to scan the inside of a patient’s organ. Tracking a basketball player’s position and speed as he moves through the arena to provide never-before tracked statistics, instantaneously. Those are two of first real-world applications that are making use of both Verizon’s 5G network and mobile edge computing capabilities tied in through AWS Wavelength.

Verizon is bringing its 5G network and MEC to life, partnering with AWS Wavelength to provide pockets of AWS computing on the carrier’s network in Boston and in the San Francisco Bay Area that can be accessed by developers to deploy latency-sensitive applications. In conjunction with its edge news, Verizon said it has turned up 5G coverage in San Jose — meaning that both 5G and AWS-based MEC capabilities will be available in Silicon Valley.

In a blog post describing the development, Tami Erwin, CEO of Verizon Business and Matt Garman, VP Sales and Marketing at AWS, said that the Wavelength sites “[extend]AWS infrastructure to Verizon’s networks by embedding AWS compute and storage services at service access points on the edge of the 5G network. This enables traffic to reach application servers running in Wavelength Zones without leaving the mobile network, reducing the latency that would result from multiple hops to the Internet, and helping developers start to unlock the potential of 5G for their applications.”

Thierry Sender, director of IoT and real-time enterprise product strategy at Verizon, said that the announcement was the culmination of several years of work. Asked where Verizon considers its “edge” to be, he said that currently, the edge is defined as being within the network but closer to the customer. In the case of the applications announced yesterday, he said, the edge compute is located within the core of its metro networks in Boston and the Bay Area — but Verizon isn’t limited to that particular “edge,” which also be at traffic aggregation points or even at customers’ premises if the application calls for that.

“We’ve architected our backbone and our network, especially with the transition to 5G, to be an environment where we can introduce compute capabilities at various points throughout the entire infrastructure,” Sender said. “The edge is where the use case from the customer requires us to be. … The edge is not a fixed place. It’s where we need it to go.”

The first two applications that the carrier highlighted were from ShotTracker and Avesha Systems. Raj Nair, acting CEO of Avesha, explained that the company is supporting an application that uses artificial intelligence and rapid compute processing to provide an “extra set of eyes” during routine surveillance scans of the colon to detect cancer. The company’s detection model is continuously trained and updated with information pushed down to the edge node, and then it analyzes the video images coming in from the patient’s scan and flags potential anomalies that a busy physician might miss while doing the same procedure back-to-back-to-back, as commonly happens. The processing “obviously needs to be done very fast, otherwise there will be a lag as the physician is moving the scope through the colon. The results of the inference have to come really fast, so that it can be overlaid on top of the right element of the colon,” said Nair.

“It’s not possible to do this in the cloud,” he added. “The only other way to do this is to actually keep a big server right there next to the physician, and that’s not practical.”

Avesha’s “application overlay” platform helps the application connect to the right edge node so that it can get the best available latency and performance, which can be tuned according to the application’s needs.

ShotTracker, meanwhile, takes 5G and MEC in a completely different direction, with a focus on sports entertainment but also on athlete training. Davyeon Ross, co-founder and president of ShotTracker, said that his company uses data from sensors on players, in basketballs and around the arena to create an

“indoor GPS”, and the positional data runs through algorithms to give real-time statistics. It has utility for sports broadcasts, for coaches and trainers and athletes themselves and even for sports betting. In a video highlighting ShotTracker’s use of 5G, Ross, says that when use of 4G versus 5G is compared, “You can distinctly see the difference in the speed of ball movement” — 5G provides more accurate, real-time information on the ball’s position.

Sender noted that while Verizon showcased some applications publicly, the carrier is involved in numerous additional efforts to put 5G and MEC to work.

“We have a lot of different customer engagements,” Sender said. “There’s a lot of excitement around what we’re doing in this space.”

Denmark leads in mobile experience: Tutela
5G RFICs take mmWave from baseband to antenna
What is a small cell, really?
IoT device managers are sticking with 4G with only 9% planning a move to 5G
5G Connectors: Enabling the global 5G vision