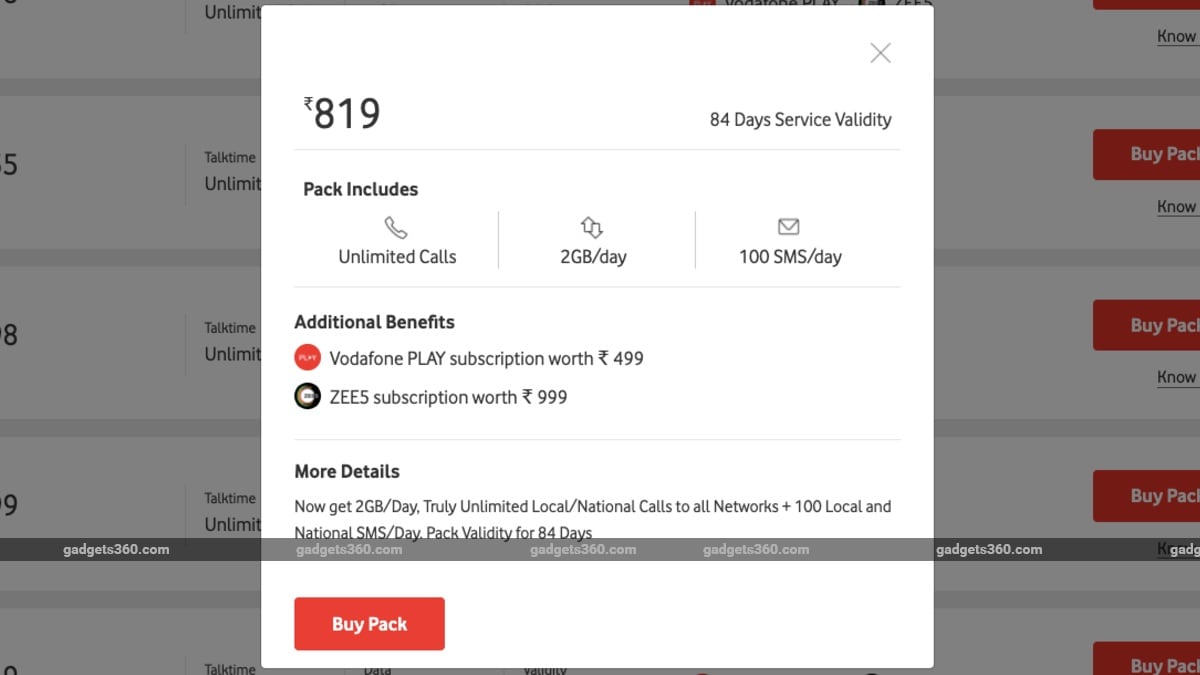 Vodafone Idea has expanded its prepaid plan portfolio adding a Rs. 819 recharge option. The new prepaid recharge plan offers 2GB high-speed daily data allocation alongside unlimited voice calls and 100 SMS messages per day for 84 days. The benefits of the Rs. 819 Vodafone prepaid recharge plan makes it identical to the Rs. 699 option by the telco. However, the earlier launched Rs. 699 prepaid plan is currently a part of Vodafone Idea’s Double Data offer under which it is providing additional 2GB high-speed data allocation on a daily basis.

As per the listing on the Vodafone India site, the Rs. 819 prepaid recharge plan is currently available only in the Delhi circle and is limited to Vodafone customers. This means that it hasn’t yet been provided for other circles and Idea Cellular subscribers.

The Rs. 819 Vodafone recharge plan also offers access to Vodafone Play and Zee5 services — alongside 2GB high-speed daily data, unlimited voice calls, and 100 SMS messages for 84 days. These benefits look similar to what you’ll get on the Rs. 699 prepaid plan, though it is presently offering 4GB high-speed data access, thanks to the Double Data offer.

However, as noticed by telecom-focussed blog OnlyTech, a listing specifically on Vodafone India’s online mobile recharge microsite suggests that the Rs. 819 plan comes bundled with a one-year extended warranty. There are no further details around whether the extended warranty is given to the user for the phone they’re using — something similar to the operator’s Red Shield offering that debuted back in 2018 for postpaid customers.

Gadgets 360 has reached out to Vodafone Idea for clarity and will update this space accordingly.

Is Redmi Note 9 the perfect successor to Redmi Note 8? We discussed this on Orbital, our weekly technology podcast, which you can subscribe to via Apple Podcasts, Google Podcasts, or RSS, download the episode, or just hit the play button below.