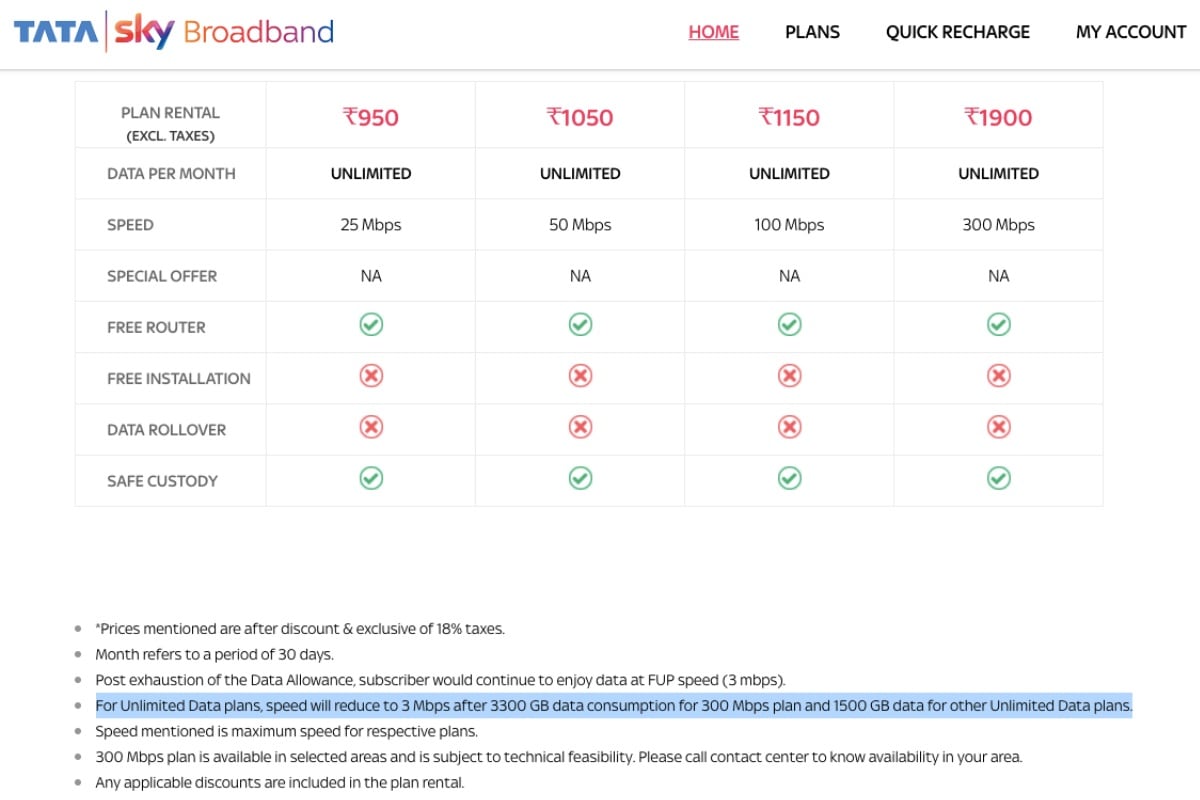 Tata Sky Broadband has increased the post fair usage policy (FUP) speed to 3Mbps from the existing 2Mbps. This new change means that users who’ve exceeded their FUP limit will continue to receive Internet access at 3Mbps on their broadband connections. Tata Sky Broadband seems to have brought the latest update specifically for its unlimited data plans that start at Rs. 700 and go up to Rs. 1,900 a month. The increase in post FUP speed would help Tata Sky Broadband attract new customers.

As per the details available on the Tata Sky Broadband website, the new FUP speed will come into place after consuming 3,300GB data on the 300Mbps plan and 1,500GB data on other unlimited plans. A recent cached version of the site shows that the operator was up until now offering 2Mbps post FUP speed in place of the new 3Mbps, as spotted by telecom-focussed blog OnlyTech.

Tata Sky Broadband has multiple unlimited broadband plans across various circles in India. The plans start at a monthly charge of Rs. 700 in Jaipur and Lucknow, while they begin at Rs. 950 in cities including Bengaluru, Chennai, Delhi, and Pune, among others. The operator also lets users choose between monthly, quarterly, half yearly, and yearly plans.

In April, Tata Sky Broadband introduced the 1,500GB FUP limit on its unlimited plans. That change was, however, carried along with the 2Mbps speed allocation post exceeding the FUP quota.

Tata Sky Broadband isn’t a big player compared to ACT Fibernet, Airtel, and Jio Fiber. However, the ongoing changes could help the brand get some consumer attention in the market.

Is Mi Notebook 14 series the best affordable laptop range for India? We discussed this on Orbital, our weekly technology podcast, which you can subscribe to via Apple Podcasts or RSS, download the episode, or just hit the play button below.