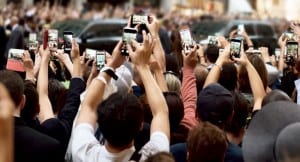 Despite a 17% year-on-year decline in China’s smartphone shipments, Huawei and Apple have risen above the trend, while 5G-enabled devices account for 33% of all sales.

The decline in the Chinese devices market has been well documented over the last few months, though it does appear COVID-19 had a significant impact on sales. According to estimates from Counterpoint Research, year-on-year shipments for the market declined by 17% for the second quarter.

This might sound like a considerable dampener, but there is good news buried amongst the dirt. 5G-enabled devices are proving to be incredibly popular, while Huawei and Apple are still growing their device’s business units.

“In terms of growth, Apple was the fastest-growing key OEM during the quarter,” said Flora Tang, Research Analyst at Counterpoint.

“Despite the market decline, Apple grew an impressive 32% YoY due to the continued popularity of the iPhone 11 series and price cuts. iPhone SE 2020 also quickly entered among the top 3 best-selling iPhones in Q2 2020.June was the best month in terms of smartphone sales so far this year after COVID-19 outbreak driven by surge in sales by Xiaomi (+42% MoM), Huawei (+11%).”

This are of course very encouraging statistics for some of those involved but could be more excitement on the horizon. The Chinese market has already shown an appetite for 5G, which is further corroborated by the estimates from Counterpoint Research here.

At the end of May, China Mobile claimed it currently had 55.6 million 5G subscribers, 11.86 million of which were added during May alone. China Telecom said it has 30.1 million, while China Unicom has not made any public comments yet. 5G deployments are progressing significant faster in China than elsewhere around the world (aside from perhaps South Korea), though there has been a level of scepticism shown towards these figures.

Interestingly enough, the Counterpoint Research adds some validity to the subscriber claims.

“Despite a slowdown in the smartphone market in China, Chinese OEMs have picked up the pace in 5G developments that were hampered by COVID-19 disruptions in Q1 2020,” said Ethan Qi, Senior Analyst at Counterpoint.

While Huawei is dominating the high-end market, the next few months could see a further surge in interest should Apple launch its own 5G device on time. Apple is somewhat of a status symbol in China (or it has been traditionally) and the release of 5G devices could see consumers flock to the stores in China, as well as all over the world.