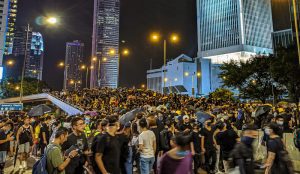 China has vowed to punish the UK for trying to help Hong Kong citizens. Well, two can play at that game.

The technology business and politics are increasingly overlapping, and nowhere is that more apparent than with Huawei. However much the Chinese vendor tries to insist it has no direct ties to the Chinese state, the increasingly domineering behaviour of its government makes that hard to believe.

The imposition of a new law on the semi-autonomous region of Hong Kong, which would allow China to extradite and punish any HK residents who do things it disapproves of, is the latest such act. While the persecution of the Uighurs has elicited little international condemnation, the Chinese Communist Party’s desire to impose its will on HK’s 7.5 million residents does seem to have got the world’s attention.

As its former colonial power, the UK has a special interest in the welfare of Hong Kong and its citizens, which was supposed to be protected by the 1984 Sino-British Joint Declaration. This new law is viewed as being in breach of that declaration and, in addition to the usual diplomatic huffing and puffing, the UK has offered a path to citizenship to three million HK residents in response.

If there’s one thing authoritarians hate it’s having their bullying challenged and the CCP has reacted to the UK’s offer by making a bunch of vague threats of retaliation. Since China seems to have a taste for political kidnapping these days, those threats should be taken seriously. There will be plenty of UK citizens in Hong Kong for it to persecute, but if our government were to give an inch in the face of such tactics, that would surely just embolden the CCP further.

This escalation of diplomatic tensions between the UK and China coincides with an ongoing review of Huawei’s involvement in the UK’s 5G networks. Earlier this week Prime Minister Johnson appeared to signal a hardening of his government’s stance on the matter and its hard to imagine being directly threatened by the Chinese government has done anything other than accelerate that process.

Huawei can’t help being a Chinese company, but the actions of its government are making it increasingly hard to believe the vendor couldn’t be forced to cooperate with the Chinese state if called upon to do so. Huawei presumably has nothing to do with the HK situation, but the sins of the government are increasingly being paid for by its companies. Johnson will find it very hard to resist imposing greater restrictions on Huawei, if only to make a political point.