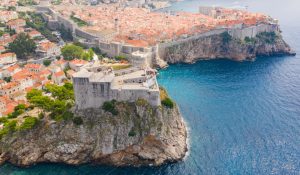 Hrvatski Telekom Croatia has given Ericsson’s Croatian associated company all its 5G RAN work, which is apparently the first 5G deal in Croatia.

With all the talk of tech sector Balkanisation around the world, it’s nice to be able to refer to the region itself for once. Part of the famously fractious former Yugoslavia, Croatia still apparently needs to give its bit of Ericsson a special name – Ericsson Nikola Tesla. Intriguingly Wikipedia says the famous inventor is Serbian-American, despite him having been born in modern day Croatia, which seems controversial.

Anyway, Ericsson Nikola Tesla is described as an associated company, whatever that means. Its ‘about us’ page indicates Ericsson bought 49% of it a while back, so maybe that’s it. Owning less than half of it hasn’t stopped Ericsson chalking this up as a full 5G win nonetheless.

“I am proud that, after our first demonstration of 5G technology two years ago, we have now signed the first 5G agreement in Croatia,” said Arun Bansal, Ericsson President of Europe and Latin America. “This partnership agreement will enable cutting-edge solutions from Ericsson’s radio system portfolio and the fifth generation of mobile communications to transform the country in the coming period. As a reliable partner with over a century of communications experience, we’re ready to bring 5G to Hrvatski Telekom’s customers across Croatia.”

“The past months made it clear how vital the ICT industry and investments in digital infrastructure are, as they are a key lever for the society’s digitalization and return to economic growth,” said Kostas Nebis, CEO of Hrvatski Telekom. “The cooperation with Ericsson is the latest example of our commitment to supporting the economy and society and we intend to continue keeping the pace of our network investment plan and connecting everyone in Croatia with the digitalization opportunities.”

“5G technology implementation is applicable on a broad scale and resonating with Croatia’s needs, such as enabling higher energy efficiencies through smart metering and dynamic management of power supply, higher efficiency in agriculture through connected and automated devices and machinery, or optimization of irrigation processes, as well as in variety of other industries.”

Croatia isn’t the biggest country in the world and Ericsson only seems to own half of the company, but a win’s a win at the end of the day.