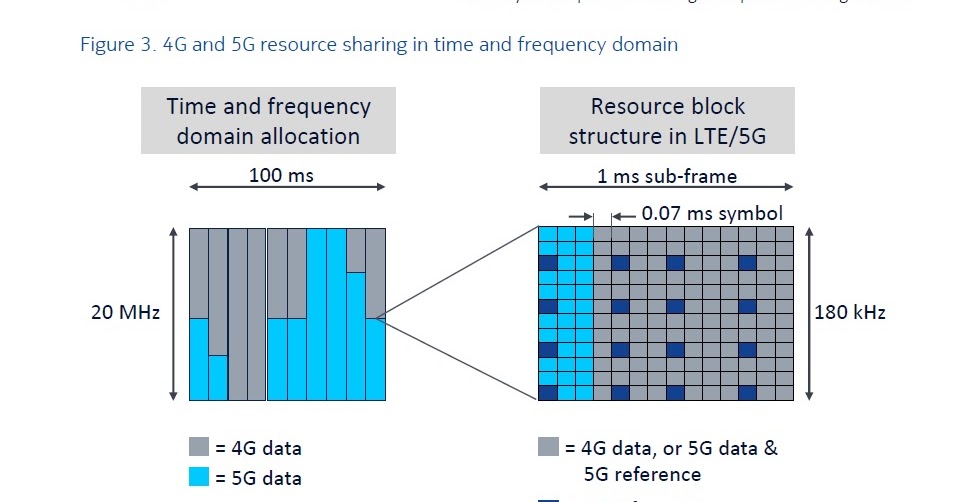 About 5G
5G Dynamic Spectrum Sharing is a hot topic. I have already been asked about multiple people for links on good resources / whitepapers. So here is what we liked, feel free to add anything else you found useful as part of comments.

Nokia has a nice high level overview of this topic which is available here. I really liked the decision tree as shown in the tweet above. I am going to quote a section here that is a great summary to decide if you want to dive deeper.

DSS in the physical layer 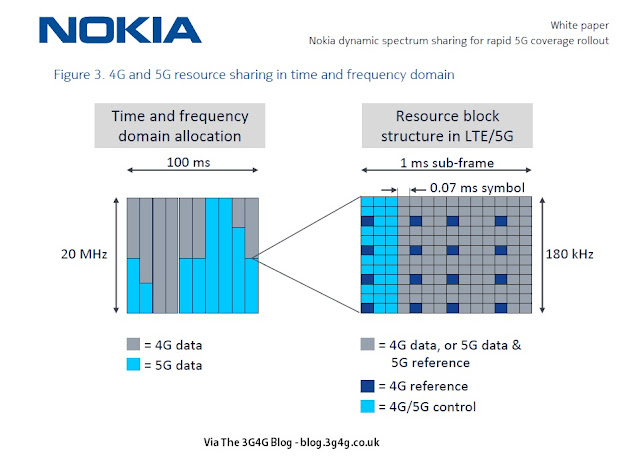 The 5G physical layer is designed to be so similar to 4G in 3GPP that DSS becomes feasible with the same subcarrier spacing and similar time domain structure. DSS is designed to be backwards compatible with all existing LTE devices. CSPs therefore need to maintain LTE cell reference signal (CRS) transmission. 5G transmission is designed around LTE CRS in an approach called CRS rate matching.

5G uses demodulation reference signals (DMRS), which are only transmitted together with 5G data and so minimize any impact on LTE capacity. If all LTE devices support Transmission Mode 9 (TM9), then the shared carrier has lower overheads because less CRS transmission is required. The control channel transmission and the data transmission can be selected dynamically between LTE and 5G, depending on the instantaneous capacity requirements.

A nice webinar looking at 5G Dynamic Spectrum Sharing a.k.a. DSS. A simple explanation is, use MBSFN subframes to tell LTE users that these resource blocks are not available and then use that spectrum for 5G NR.https://t.co/ettybXHMWV pic.twitter.com/zq7BQ9ImdB

The second resource is this Rohde & Schwarz webinar here. As can be seen in the tweet above, it provides nice detailed explanation. 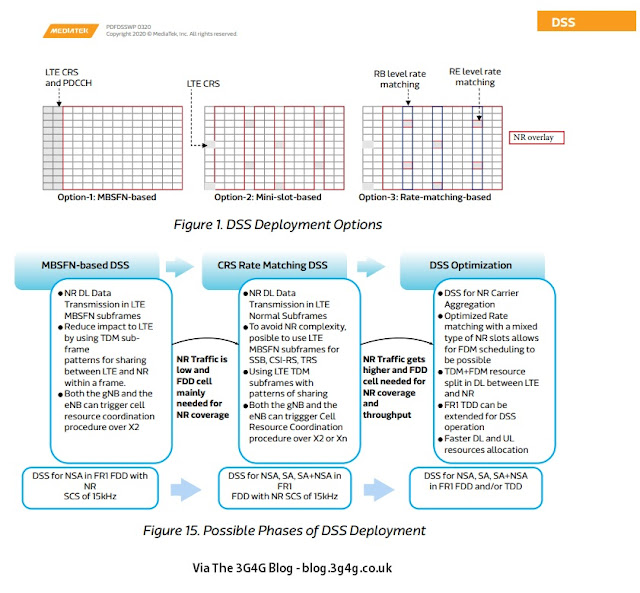 Finally, we have a Comprehensive Deployment Guide to Dynamic Spectrum Sharing for 5G NR and 4G LTE Coexistence, which is a nice and detailed whitepaper from Mediatek. Quoting a small section from the WP for anyone not wanting to go too much in deep:

The DSS concept is based on the flexible design of NR physical layer. It uses the idea that NR signals are transmitted over unused LTE resources. With LTE, all the channels are statically assigned in the time-frequency domain, whereas the NR physical layer is extremely flexible for reference signals, data and control channels, thus allowing dynamic configurations that will minimize a chance of collision between the two technologies.

One of the main concepts of DSS is that only 5G users are made aware of it, while the functionalities of the existing LTE devices remain unaffected (i.e. LTE protocols in connected or idle mode). Therefore, fitting the flexible physical layer design of NR around that of LTE is needed in order to deploy DSS on a shared spectrum. This paper discusses the various options of DSS implementation, including deployment challenges, possible impacts to data rates, and areas of possible improvements.

NR offers a scalable and flexible physical layer design depicted by various numerologies. There are different subcarrier spacing (SCS) for data channels and synchronization channels based on the band assigned. This flexibility brings even more complexity because it overlays the NR signals over LTE, which requires very tight coordination between gNB and eNB in order to provide reliable synchronization in radio scheduling.

The main foundation of DSS is to schedule NR users in the LTE subframes while ensuring no respective impact on LTE users in terms of essential channels, such as reference signals used for synchronization and downlink measurements. LTE Cell Reference Signals (CRS) is typically the main concept where DSS options are designated, as CRS have a fixed time-frequency resource assignment. The CRS resources layout can vary depending on the number of antenna ports. More CRS antenna ports leads to increased usage of Resource Elements (REs). CRS generates from 4.76% (1 antenna port) up to 14.29% (4 antenna ports) overhead in LTE resources. As CRS is the channel used for downlink measurements, avoiding possible collision with CRS is one of the foundations of the DSS options shown in figure 1. The other aspect of DSS design is to fit the 5G NR reference signals within the subframes in a way to avoid affecting NR downlink measurements and synchronization. For that, DSS considers the options shown in figure 1 to ensure NR reference signals such as Synchronization Signal Block (SSB) or Demodulation Reference Signal (DMRS) are placed in time-frequencies away from any collision with LTE signals.

MBSFN, option 1 in figure 1, stands for Multi-Broadcast Single-Frequency Network and is used in LTE for point-to-multipoint transmission such as eMBMS (Evolved Multimedia Broadcast Multicast Services). The general idea of MBSFN is that specific subframes within an LTE frame reserve the last 12 OFDM symbols of such subframe to be free from other LTE channel transmission. These symbols were originally intended to be used for broadcast services and are “muted” for data transmission in other LTE UE. Now this idea has been adjusted for use in a DSS concept, so that these reserved symbols are used for NR signals instead of eMBMS. While in general LTE PDCCH can occupy from 1 to 3 symbols (based on cell load), the first two OFDM symbols of such MBSFN subframe are used for LTE PDCCH, and DSS NR UE can use the third symbol. Using MBSFN is completely transparent to legacy LTE-only devices from 3GPP Release 9 onwards, as such LTE UE knows that these subframes are used for other purposes. In this sense this is the simplest way of deploying DSS. This method has disadvantages though. The main one is that if MBSFN subframes are used very frequently and it takes away resources from LTE users, heavily reducing LTE-only user throughput. Note that option 1 shown in figure 1 does not require LTE MBSFN Reference Signals to be used, because the MBSFN subframe is used to mute the subframe for DSS operation only, and LTE CRS shall only be transmitted in the non-MBSFN region (within the first two symbols) of the MBSFN subframe.

The two other options illustrated in figure 1 are dealing with non-MBSFN subframes that contain LTE reference signals. Option 2 is ‘mini-slot’ based; mini-slot scheduling is available in NR for URLLC applications that require extremely low latency. The symbols can be placed anywhere inside the NR slot. In respect to DSS, mini-slot operation just eliminates the usage of the symbols that contain LTE CRS and schedule only free ones for NR transmission. The basic limitation of this method comes from the concept itself. It is not very suitable for eMBB applications as too many resources are outside of NR scheduling. However it still can be utilized in some special cases like 30 kHz SSB insertion which will be described later in this paper.

Option 3 is based on CRS rate matching in non-MBSFN subframes, and it is expected to be the one most commonly used for NR data channels. In this option, the UE performs puncturing of REs used by LTE CRS so that the NR scheduler knows which REs are not available for NR data scheduling on PDSCH (Physical Downlink Shared Channel). The implementation of this option can be either Resource Block (RB)-level when the whole RB containing LTE CRS is taken out of NR scheduling, or RE-level where NR PDSCH scheduling avoids particular REs only. The end result of this method is that the scheduler will reduce the NR PDSCH transport block size as the number of REs available for scheduling become less in a slot.

VodafoneZiggo launching 5G in Netherlands using DSS from Ericsson in 1800MHz band. Due to spectrum situation in Ned this is all VZ has at launch so it’s 5G on the icon but offering customers only 10% faster speeds than they can get with 4G. https://t.co/BLirTX8XjU

Personally, I am not a big fan of DSS mainly because I think it is only useful in a very few scenarios. Also, it helps operators show a 5G logo but doesn’t provide a 5G experience by itself. Nevertheless, it can come in handy for the coverage layer of 5G.

In one of the LinkedIn discussions (that I try and avoid mostly) somebody shared this above picture of Keysight Nemo DSS lab test results. As you can see there is quite a bit of overhead with DSS.