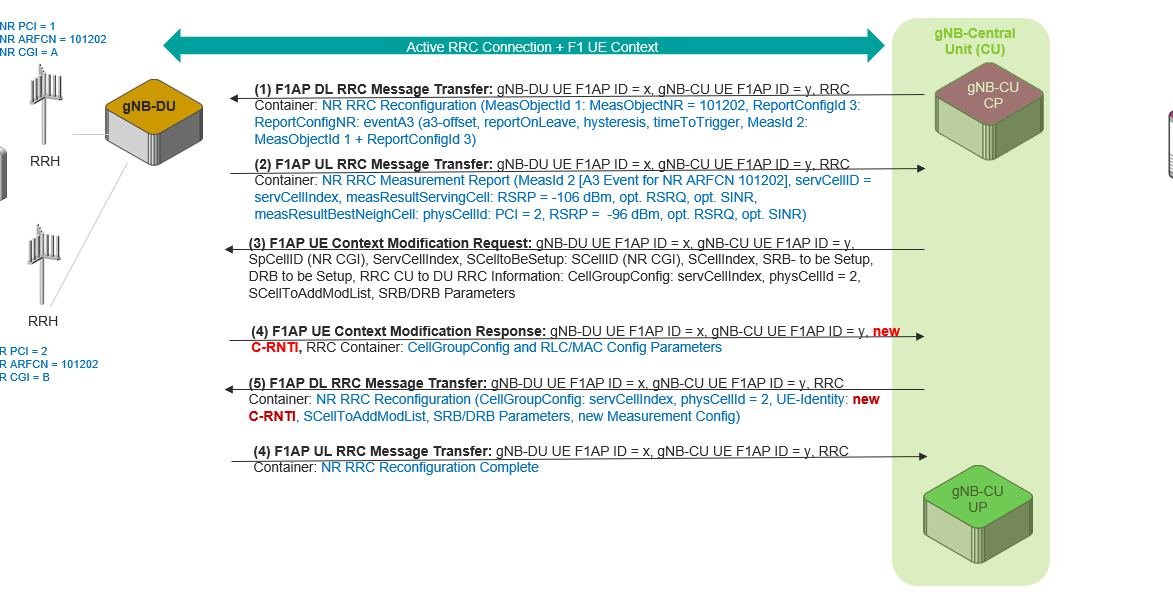 In the previous posts of this series I described O-RAN interfaces and protocols, connection establishment and connection release procedures. Now it is time to look at handovers.

As mentioned in one of the earlier posts the gNB-CU CP will be in charge of controlling hundreds of gNB-DUs in a similar way like the 3G RNC was in charge of controlling hundreds of UMTS NodeBs. As a result the most common 5G SA intra-system handovers will be intra-gNB handovers. These handovers can further be classified into intra-gNB-DU handovers (inter- as well as intra-frequency) and inter-gNB-DU handovers.

Due to the virtualization of RAN network functions we will also find another form of switching transmission path, which is a change of the gNB-CU UP during the call without mobility of the UE. This scenario I will discuss later in a separate blog post.

Today I want to focus on the intra-gNB DU handover. Here the UE moves from one cell to another one within the same distributed unit as shown in the figure below.

A prerequisite is the successful establishment of a NR RRC connection and a F1AP UE Context between the gNB-DU and the gNB-CU CP.

The F1AP transports all RRC messages between these two entities. Indeed, it transports the PDCP blocks and the gNB-DU is not aware that these PDCP blocks contain RRC messages. However, for better illustration I have not shown the PDPC part in the ladder diagram.

What we see in step 1 is a NR RRC Reconfiguration message that contains RRC measurement configurations to be enabled on the UE side. A typical trigger event for intra-frequency handovers is the A3 event that is already known from LTE RRC.

Once the UE detects a better neighbor cell meeting the A3 criteria it sends a RRC Measurement Report to the gNB-CU CP (step 2).

In step 3 the gNB-CU CP orders the gNB-DU to perform a F1AP UE Context Modification. The purpose is to allocate radio resources for the UE in the target cell and to prepare the cell change.

The gNB-DU replies with F1AP UE Context Modification Response. This messages contains the new C-RNTI and a large block of lower layer configuration parameters (e.g. for RLC and MAC layer) that need to be sent to the UE and thus, need to be transported to the gNB-CU CP before, because it is the only RAN function capable to communicate with the UE using the RRC protocol.

Hence, in step 5 we see another downlink RRC message transfer. This time it is used to transport the handover command towards the UE. The handover command is a NR RRC Reconfiguration message and it contains the new C-RNTI (new UE identity within the cell) as well as the physical cell ID of the target cell and the full set of lower layer configuration parameters previously provided by the gNB-DU.

When the gNB-CU CP receives the RRC Reconfiguration Complete message sent by the UE in step 6 the handover is successfully completed and the UE is now served by the cell with NR PCI 2.