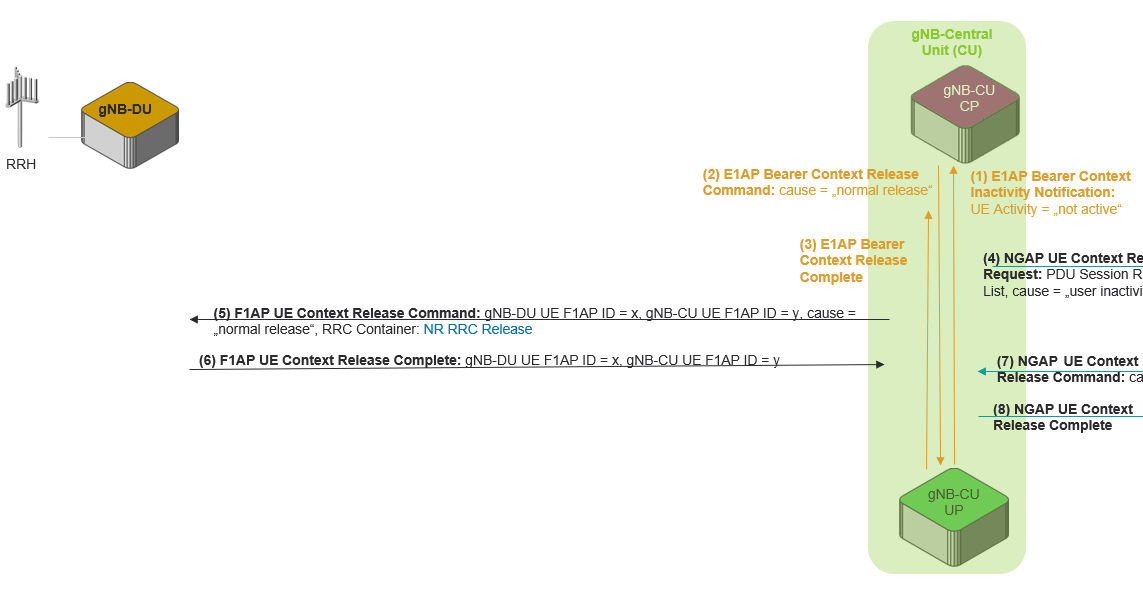 About 5G
The 3rd post of this series introduces the details of connection release in the 5G RAN.

Indeed, we find most of the release causes known from E-UTRAN in the 5G specs and it is clear that all protocols that have been involved in the connection setup need to be perform a release procedure at the end of the connection.

However, again the split into different virtual functions brings the demand for some addition messages.

This is illustrated in figure 1 for the a release due to “user inactivity”, which means: the gNB-CU UP detected that for a define time (typical settings for the user inactivity timer are expected to be between 10 and 20 seconds) no downlink payload packets have been arrived from the UPF to be transmitted.

An alternative to the connection release is the RRC Suspend procedure shown in figure 2. Here the UE is ordered to switch to the RRC Inactive state, which allows a very quick resume of the RRC connection when necessary.

In case of suspending the RRC connection the RRC Release message contains a set of suspend configuration parameters. The probably most important one is the I-RNTI, the (RRC) Inactive Radio Network Temporary Identity.

If the RRC connection is suspended, F1AP and E1AP Contexts are released, but the NGAP UE Context remains active. Just NGAP RRC Inactivity Transition Report is sent to the AMF.